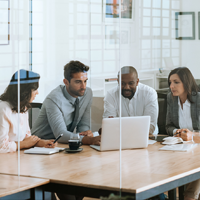 A charity that aims to improve diversity among not-for-profit boards has called on the sector to “pull its finger out” as it launches its latest bursary offering.

Getting on Board exists to help people from all walks of life become trustees.

It does this by working with charities to try to change their attitudes towards diversity and by working with aspiring trustees to better equip them to secure and thrive in a trustee role.

The proportion of charity trustees from non-white backgrounds has lagged behind the numbers for the general UK population.

To help address this, Getting on Board is offering six full bursaries for people of colour to attend its Charity Board Leadership Programme, which will allow attendees to meet some of these charities if they are looking for new trustees.

Participants will become trustees in the next nine months and would therefore need to put aside several hours for applications and interviews, on top of the course contact time.

Penny Wilson, chief executive of Getting on Board, said: “We have been talking about this topic for years, but there was a real wake-up call in 2017 with the publication of the Charity Commission’s ‘Taken on Trust’ report.

“[It showed] that in general trustees are older, white, male and with a higher level of income than the rest of society, so we need to do things to try to tackle this problem. There’s lots of talk but not much action.”

Wilson said she thought that charities often looked into improving diversity in other parts of their organisation, but might ignore trusteeship because it was difficult.

“But action has to come from both sides; people have to be supported because most roles are not advertised, so the scheme will help match charities with each individual’s passions, while exploring the sector and what it means to be a good trustee.

“So pull your finger out and take some action to improve diversity in your boards.

“Also, it doesn’t stop when you diversify – you have to actually listen to them and include them, not just because it looks good, but because more diverse voices will improve the sector.”

Third Sector’s diversity study, published in August, revealed that the proportion of chief executives at the largest charities who identify as black, Asian, minority ethnic or other (rather than white) has risen only slightly from 12 per cent in 2017 to 16 per cent, while the proportion of other senior leaders from BAME backgrounds remains static at 10 per cent.

For trustees, the numbers have risen from 10 per cent to 15 per cent, while women represent 54 per cent of senior leaders, up just five percentage points from 2017. Female representation among trustees has remained at 41 per cent.

Source – Written by Stephen Delahunty, as featured in Third Sector