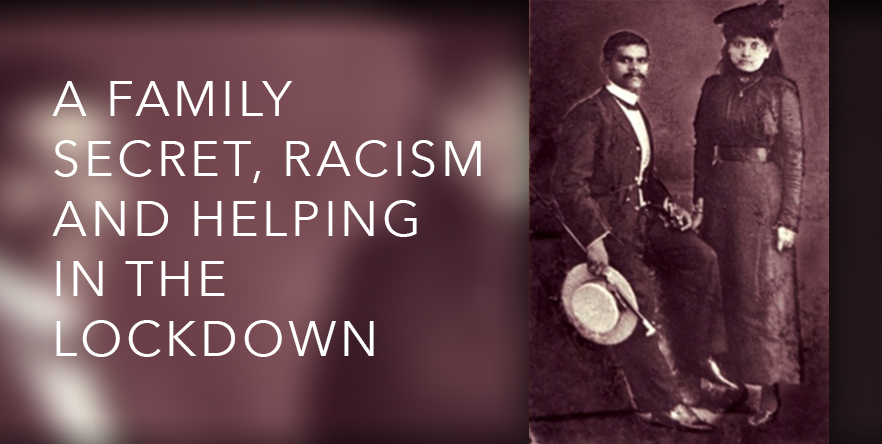 What do you do when you’re told you are being Furloughed for months and you need to stay home alone? I reached out to help others, reconnected and reminisced, including about racism.

Intergenerational oral history projects with the faith communities in Northampton, were part of what the National Diversity Award recognised in 2012. Now the Sikh community wanted me to join them again. This time I recorded and edited oral history interviews using video technology for the new Sikh Museum Northampton. Fascinating stories from people of different faith and cultural backgrounds – including experiences of racism, and the most amazing Covid-19 help. It opens soon – please visit! 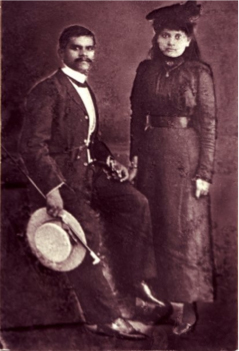 On a quiet afternoon, as I edited a Sikh Museum Northampton video, a message popped up on Facebook. A curiously familiar face, yet unfamiliar name.

‘Hi, my dad and your dad were cousins and friends at school, and both were taught by your grandfather ‘Apple’ John Ambrose, so I thought I’d say hello!’.

My cousin connected me to cousins I never knew I had. Scattered across the world, we realised that we each knew only bits of our family history. We agreed to build our story in a shared space everyone can visit. I set up a Facebook page “Our family history page” (@AmbrosefamilyhistorySL). I began posting photos, extracts from family letters, and family legends corroborated by written records.

Boom! A secret was out!

Family information passed down to me didn’t match a professional genealogy Burgher cousins had for moving to Australia in the mid-20th Century. They had believed it, and passed it on, for generations.

“The name Burgher belongs to the descendants of the Dutch and Portuguese  and other Europeans born in Ceylon, and the right to this distinction must be decided by the country from which the father or paternal ancestors came…

…If the right to be denominated Burgher be once lost, by the legitimate father being a Sinhalese or other Indian, it cannot be recovered”

Sir Richard Ottley, Chief Justice of the Supreme Court of Ceylon, 1833
From: ‘The Rise and Fall of Dutch Burgher Ethnicity in Sri Lanka’ by J.Henry, p175

In British Ceylon, ethnicity mattered. The British gave Burghers privilege relative to other ethnic groups. Post-empire, Burghers were seen as too close to the British and were marginalised. They often only spoke English so were disadvantaged by the 1956 “Sinhala only” language Act. Many felt compelled to leave. Some had to meet Australia’s “Whites only” policy. “Certified European” genealogies proved sufficient European blood. Expectations of Australian officials differed markedly.

‘….Customs Boarding Officers who act for Immigration Department on arrival ships Australia have reported in fifty-five cases that persons arriving from Ceylon holding certificates issued your office stating that they are predominantly of European descent are definitely non- European in appearance and do not come within category of persons eligible permanent admission.

In British Ceylon, it helped to be European or Burgher. Theodore changed the family’s surname ‘Ambrosepulle’, to the more European “Ambrose”, and ‘lost’ his family book that carefully recorded his heritage. He rewrote the book entries, in detail – but ‘could not recall’ any Tamil Chetty side – yet his grandfather from Madras lived locally to him. It was ‘mere coincidence’ that he spoke Tamil and looked too dark to be European. He only admitted his true identity to my uncle when confronted.

The ethnically-based civil war from the 1980s to 2009 led to family hiding Tamil roots too. So, by chance, it was only a few days ago in 2020 that the truth was revealed when I posted the evidence of the confrontation and corroborative written records.

And so, racism, privilege and discrimination – ancient and within lived experience – became an initial talking point, especially with older cousins. People had done their best, faced with racist policies and systems. They discovered that in United Kingdom, like Australia, people saw them as Asian, not European.

I was proud to hear how those of us who survived ‘The Black July 1983” racial violence, unaware of one another, had each done what we could to warn and rescue people.

A highlight has been connecting with ‘Old Boys’ my grandfather taught, hearing tales of what an unruly lot they were and their lessons with their strict yet much loved teacher.

Helping the community is a family value and a personal one. Since April I have provided peer support for Furloughed colleagues, done socially-distanced sittings in court, and connected to Chief Executives and managers, helping charities adjust offers to Covid-19 realities, review governance and manage national project communications. I developed culturally-sensitive Covid-19 guidance to enable expansion of Sikh community volunteering. I befriended a lady locally. I helped Versus Arthritis develop their national involvement offer.

I have missed working for Alzheimer’s Society. Before Furlough I was enabling people with dementia to influence solutions to challenges about shopping, care homes… Even before the disproportionate effect of Covid-19 on people with dementia was in the news, I saw that much more needed to be done to help them. Colleagues not on Furlough, and volunteers, faced huge increases in amount and complexity of supporting people. Corona heroes – I am so proud of them!

While I couldn’t do anything personally, the Dementia Experience Toolkit has helped!

It is a credit to everyone involved that it is even more relevant now! It’s helped people find out how to use video calls, observation, photo diaries and more, to get feedback, understand and improve the experience of people with dementia. In the lockdown use increased to 50 to 100 views a day, and by July it had around 50,000 views by over 24,000 users. Popular pages include supporting inclusion, cultural sensitivity, and producing dementia-friendly information.

Last year I led co-production of the Dementia Experience Toolkit with 100 people with dementia, and many other people too including dementia researchers, Alzheimer’s Society teams, 3 Nations Dementia Working Group, and other organisations. My National Diversity Awards nominee – and winner (Positive Role Model: LGBT), Patrick Ettenes, was one of the people involved. ‘It takes a village’ was how Dr Suzie Snowden, who provided valuable inputs on evaluation, well described it – much more than any one person could have done. I was delighted for everyone involved when I received communications that it had been nominated in the Inclusive Companies Awards this year.

I am so sorry that the Inclusive Companies Awards cannot go ahead at the moment. Staying safe has to come first, of course. If you can do nothing else please take a moment to tell people how much you appreciate them and their efforts.

One Comment on “A family secret, racism and helping in the lockdown”