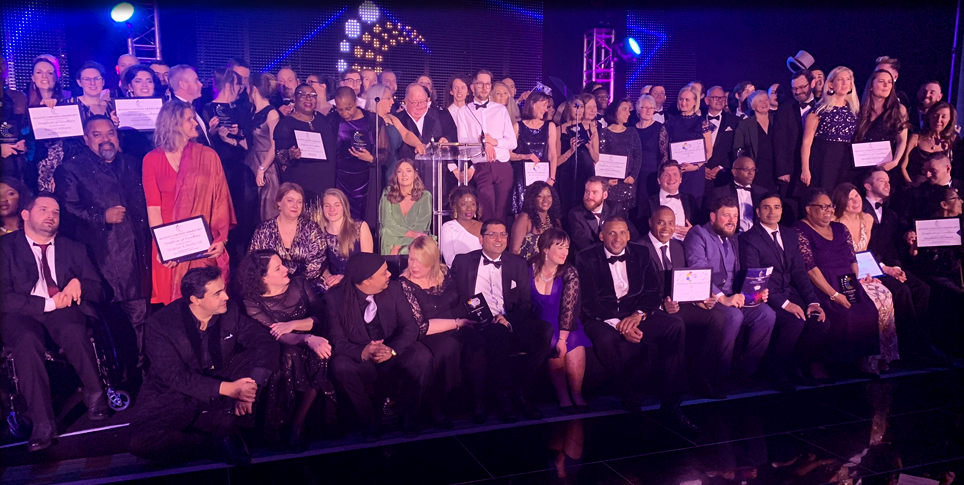 COMPANIES and role models nationwide have broken boundaries to strengthen UK diversity, and were honoured for their extraordinary commitment to the equality agenda at Thursday’s ceremony, at the Hilton Manchester Deansgate.

This year perhaps more than any other in recent history, we have needed the power of unity to overcome times of adversity. In these moments of crisis, champions have emerged to lead in a vital movement towards a more united society.

The Inclusive Companies Awards have reflected upon the thousands of people who have shown resilience, determination and courage to deliver change, highlighting an elite mix of diversity ambassadors who work tirelessly to make the country a more inclusive place to live and work.

Inclusive Employers, Best Diversity Resources, Consultancy’s, Mentors, Heads of Diversity, Outstanding Networks, Diversity Champions, Marketing Campaigns and Lifetime Achievers were all recognised in a celebration that delivered the best of British diversity across all UK industries.

The one-of-a-kind ceremony kicked off with a keynote speech from D&I innovator Fiona Daniel and CEO Paul Sesay as they exclusively launched a new initiative to accelerate inclusion from the top, Inclusive CEO’s. Known for his motivational speeches, Sesay didn’t disappoint as he addressed the audience.

“With every news report and article of events happening across the world, it is now even more important than ever to stand together”, said Sesay. “It is your stories and commitment that enable this, so I encourage you to share how you enabled that change in yourself or others, and how every day you inspire hope.”

Sue Liburd MBE was awarded the first accolade of the night for developing the growth of talented women in business who rise to senior leadership positions; and Christine Ondimu was recognised as the Mentor of the Year for leading over 300 BAME and non BAME members of staff at HSBC into getting involved in various types of community service initiatives around the UK.

The Financial Ombudsman Service celebrated two wins as their CEO Caroline Wayman accepted the award for Chief Executive of the Year for building an inclusive culture, whilst their ethnicity employee network Embrace Scooped the Outstanding Diversity Network Award.

Another highlight of the evening came when Manchester United took home the Marketing Campaign of the Year Award for their HATRED Initiative. The extraordinary video which has been watched by millions, saw players from Manchester United’s First Team and Manchester United Women come together to stand against all forms of discrimination. Utopia was awarded the Consultancy of the Year Accolade for helping businesses build more purposeful, inclusive and entrepreneurial cultures through change programmes such as ‘accelerates’ and ‘hacks’.

With a career as a disabled artist spanning 20 years, award-winning actor and writer Deborah Williams was the recipient of the prestigious Lifetime Achiever Award. Now CEO of the Creative Diversity Network, Deborah is transforming UK broadcasting and leading on the initiative to double the percentage of disabled people working in the freelance supply chain by 2020.

The widely anticipated rankings of the Inclusive Top 50 UK Employers List were also revealed, with media company Sky featuring at number 1 for the first time since the list’s inception. Bloomberg (2nd) Thomson Reuters (3rd) Touchstone (4th) and UK Power Networks (5th) were listed as the top 5 most inclusive companies nationwide.

Compiled by a dedicated panel of judges, the list has been collated based on each organisation’s performance in a range of areas within the diversity arena. Organisations featured provided sufficient evidence on an amalgamation of topics including recruitment procedures, training and a host of diversity related initiatives.

The evening ended with spectacular performances from Gospel Touch Choir and Soul singer-songwriter Dionne Bromfield. Gracing the airways of The One Show, Channel 4 and Ant & Dec’s Saturday Night Take Away, Gospel Touch Choir impressed the audience with their rich harmonies before Dionne took centre stage to close the ceremony. First signed to Lioness at Island Records, a label created by her biggest fan and godmother, Amy Winehouse, Dionne has released two albums and supported the likes of Bruno Mars.

Consultancy of the Year: Utopia

Highly Commended: McCain – We Are Family

As the year comes to a close and we look ahead to 2020, it is clear that the game changers and trail blazers will continue to promote equality of opportunity for all, giving every individual the chance to achieve their potential, free from prejudice and discrimination.

There is no doubt that the impact made by this prominent array of diversity patrons is unprecedented.